The stakes were high - albeit clear - going into the match. After Bassett's loss at Trowbridge Town last week - only their second of the campaign - and Pewsey's midweek win against Stratton Juniors, hosts Pewsey started the afternoon with a one point advantage having played a game more.

Those results meant that a win for either side would be enough to clinch top spot. A draw, meanwhile, would have kept the race alive and required Bassett to gain at least a point in their final match of the campaign away at Salisbury Development next Saturday.

It was therefore set up to be a thrilling finale to what has been an engaging, back-and-forth title race. And the game did not disappoint, with both sides demonstrating the quality at both ends of the pitch that had set them out as a cut above the rest of the league throughout the season.

Ultimately, Richards' 34th league goal of the campaign proved to be enough as Steve Yeardley's side successfully defended the early lead - and effective two-goal advantage - that afforded them.

As would be expected given what was on the line, Pewsey sought to throw everything they had at Bassett. However, a valiant defensive effort - particularly in the second half - denied Vale the goals they needed to either force Bassett to get a result at Salisbury or to take the title themselves.

The opening 15 minutes were understandably a cagey affair, with both sides frustrating each other, limiting their opponents to half chances, with a set piece looking likely to be the source of the first goal.

Shortly after the 15 minute mark had passed, the visitors went close to breaking the deadlock, Matt Bennett getting beyond the Pewsey back line and firing in a shot that looked destined for the top corner of the net but saw Louie LaTouche in the Pewsey goal pull off a stunning save.

A minute later Pewsey went straight down the other end and went close themselves to getting the opener, Harry Hoareau seeing his shot deflected wide of the goal.

A goal was coming, and it was to go to the visitors a minute later. A break down the right saw Bennett outpace the Pewsey defence and hit a powerful low cross across the Pewsey six-yard box and it was met perfectly by Richards who steered into the net.

Pewsey then suffered a double blow with firstly Ryan Banks having to leave the pitch with a back injury following a collision with his own player Hoareau and then Ryan Thomas going down in the box as he twisted his knee in the turf. Two substitutions were required before there were even 20 minutes on the clock. Luckily Pewsey had more than capable replacements they could bring on with Harvey Flippance, fresh from his goal scoring exploits helping Westbury United to gain promotion to the Southern League, and the skilful youngster Rory England brought on.

Just before the half hour mark Flippance had his first chance of the game but mishit his shot and it remained 1-0.

Flippance and Hoareau were now linking up well and Hoareau went close to the equaliser on 34 minutes when, following some hesitation in the Basset defence, Pewsey were able to create a turnover and fed in Hoareu but his shot across goal went wide of the post.

Two minutes later Flippance got behind the visitor's defence after a long ball over the top but the Bassett 'keeper Simon Notman was quick off his line and denied the Pewsey striker a shot on goal.

Just before half time Pewsey's Jake Force-Jones had a half chance but his shot went wide of the post, and it remained 1-0 to Bassett at the break in what had been a tight and tense half of football with both defences nullifying the potent strikers that each team possessed.

The early action in the second half saw both sides go close with free kicks from just outside the box. First Pewsey's leading scorer James Guthrie saw his free kick saved by Notman and then two minutes later at the other end it was Pewsey 'keeper LaTouche's turn to prevent his side from going further behind, pulling off another excellent save to deny Sam Ockwell's powerfully hit free kick.

Just before the hour mark Pewsey had their best chance of the game after Bassett failed to properly clear a corner, the ball falling to Hoareau just outside the six-yard box but he fired way over.

Pewsey were now pushing hard for the equaliser and Hoareau again went close for the home side, his low shot from close range forcing Notman into making another great save to maintain his side's lead.

Notman then went from stopping goals at one end to almost creating one at the other end, his long kick finding Richards inside the opposition area but Richards' header went just wide of the post.

With Pewsey pushing men forward in search of the equaliser they became susceptible to the quick break, and they could well have been two goals down when a ball over the top saw Bennett get clear of the Pewsey defence and his powerfully hit shot was spectacularly turned onto the crossbar by LaTouche and the rebound cleared to safety.

There were two further chances for Bennett, but he was unable to put either away and the division's top scorer at the start of the day was not having any luck in front of goal.

Pewsey continued to push for that elusive equaliser but were unable to unlock a disciplined Bassett defence, who used all of their experience to see out the closing minutes without conceding.

The referee's final whistle saw wild celebrations as the visitors knew they had secured the title. But boy had it been a battle all afternoon and indeed all season between the division's top two sides.

Bassett thus had joined the club's 1987-88 first team in winning the Wiltshire League's top division. Commiserations go to Pewsey for such a valiant effort, falling just short in the end.

Bassett manager Steve Yeardley was obviously delighted at the end but was understandably emotionally drained after an eventful afternoon and season.

Commenting after the game he said: "The league title was reward for all the hard work we asked of the players during training and matches throughout the season, we have asked so much of the players this season."

"When Benno kept missing those chances at the end I was worried it was going to be one of those days but the defence were superb today and we deserved to win it in the end."

Yeardley made special mention of captain Nick Mason, Ben Brown and Ben Spackman who have been long standing members of the squad for a number of seasons and had been part of the side that had struggled only a couple of seasons ago.

Bassett now go to Salisbury Development next week for their final game knowing that the pressure is off with the title already secured. 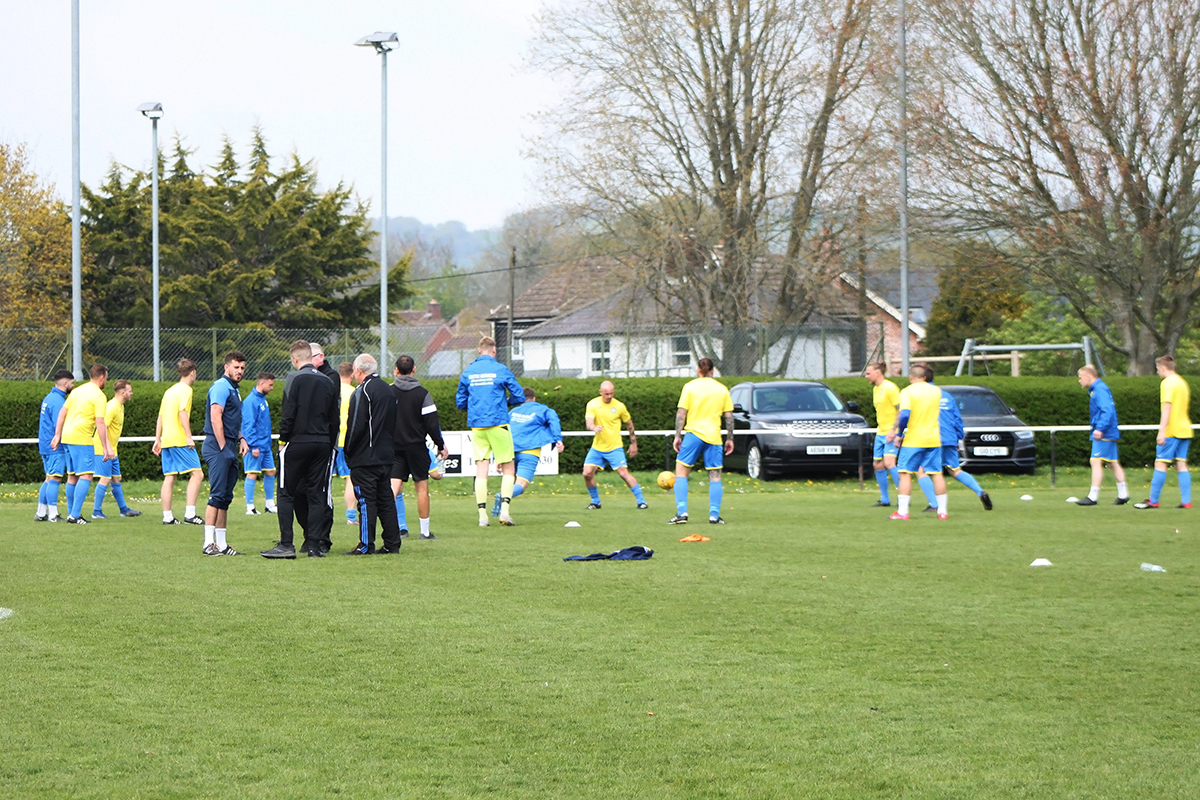 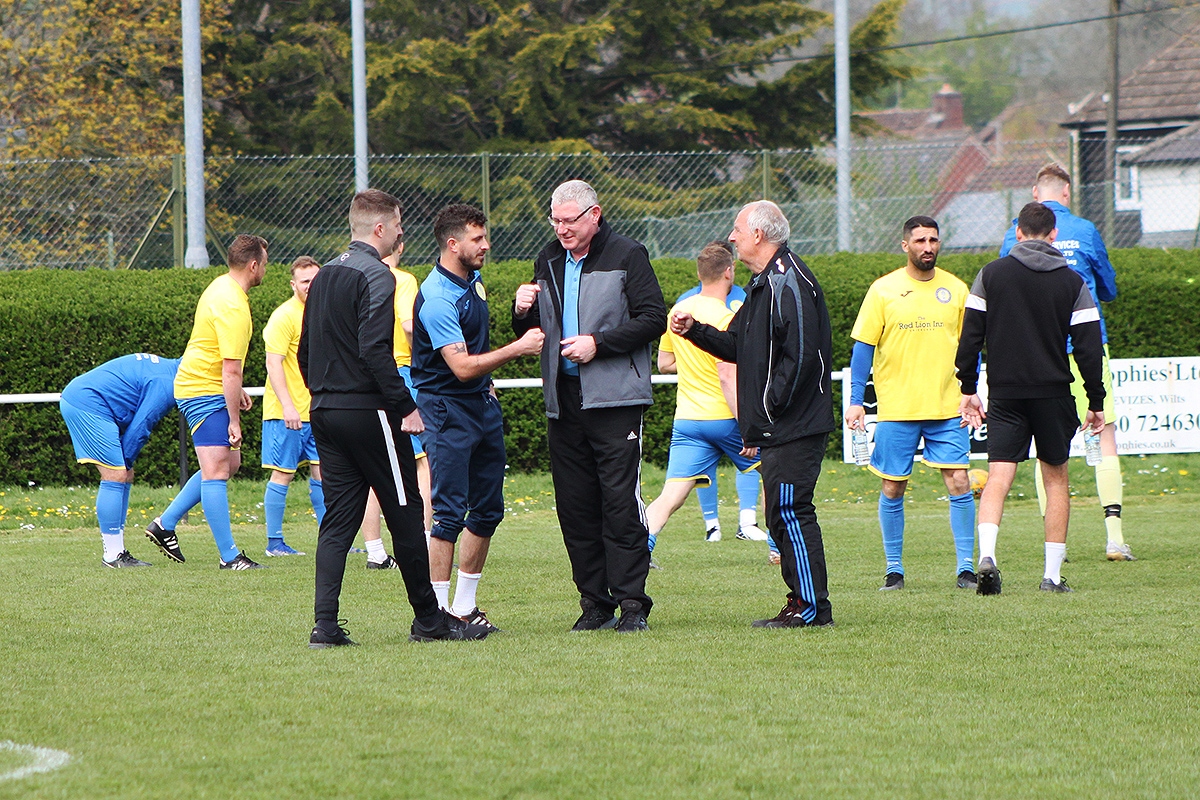 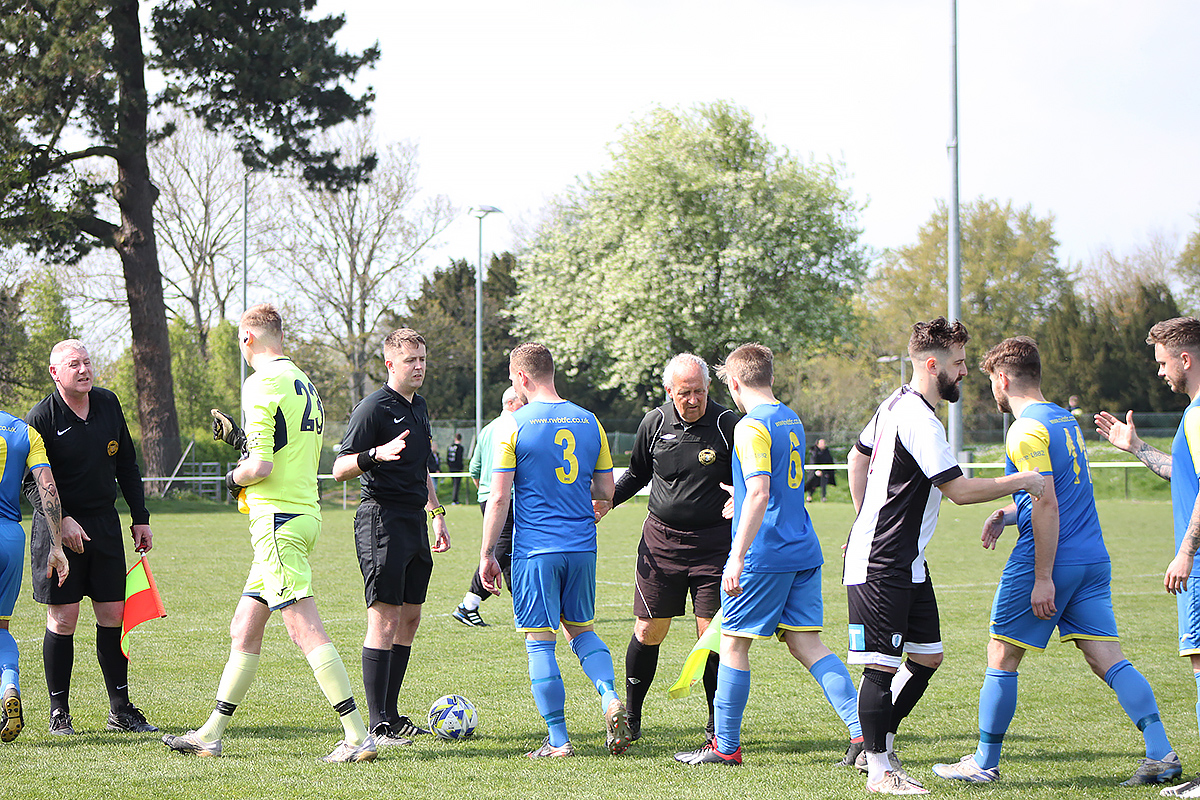 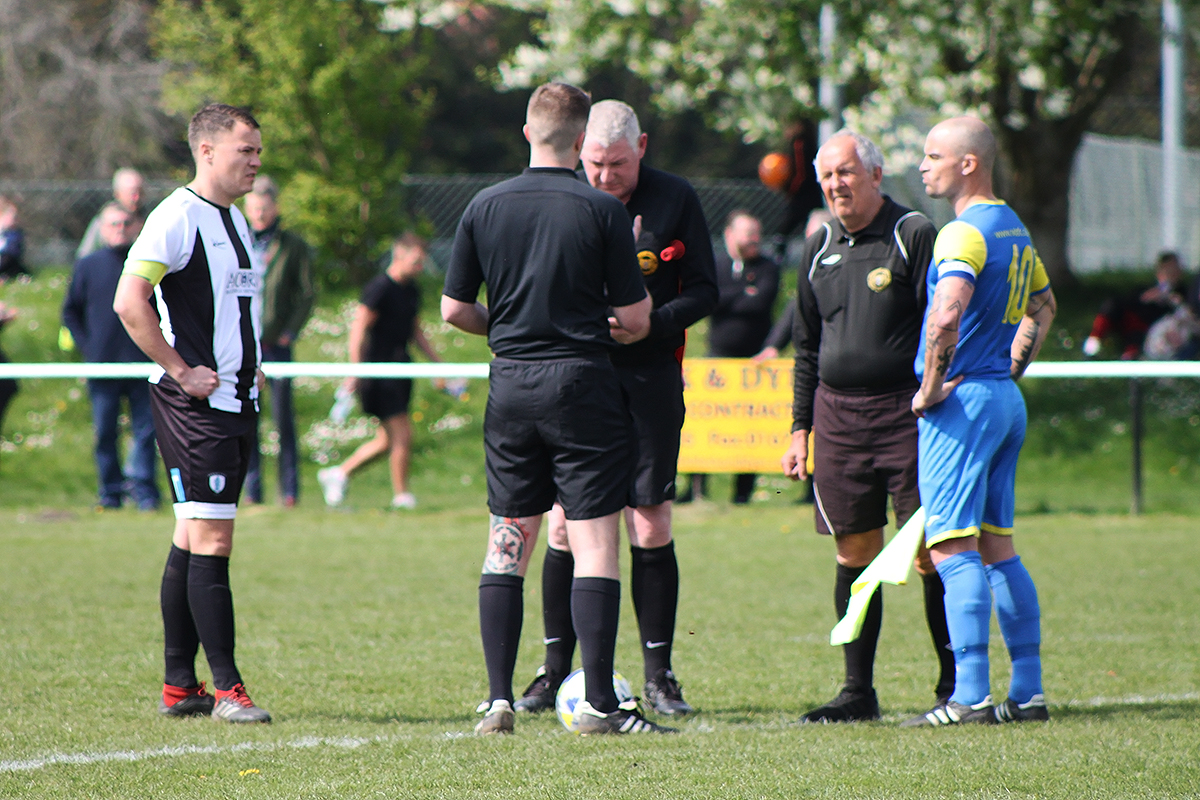 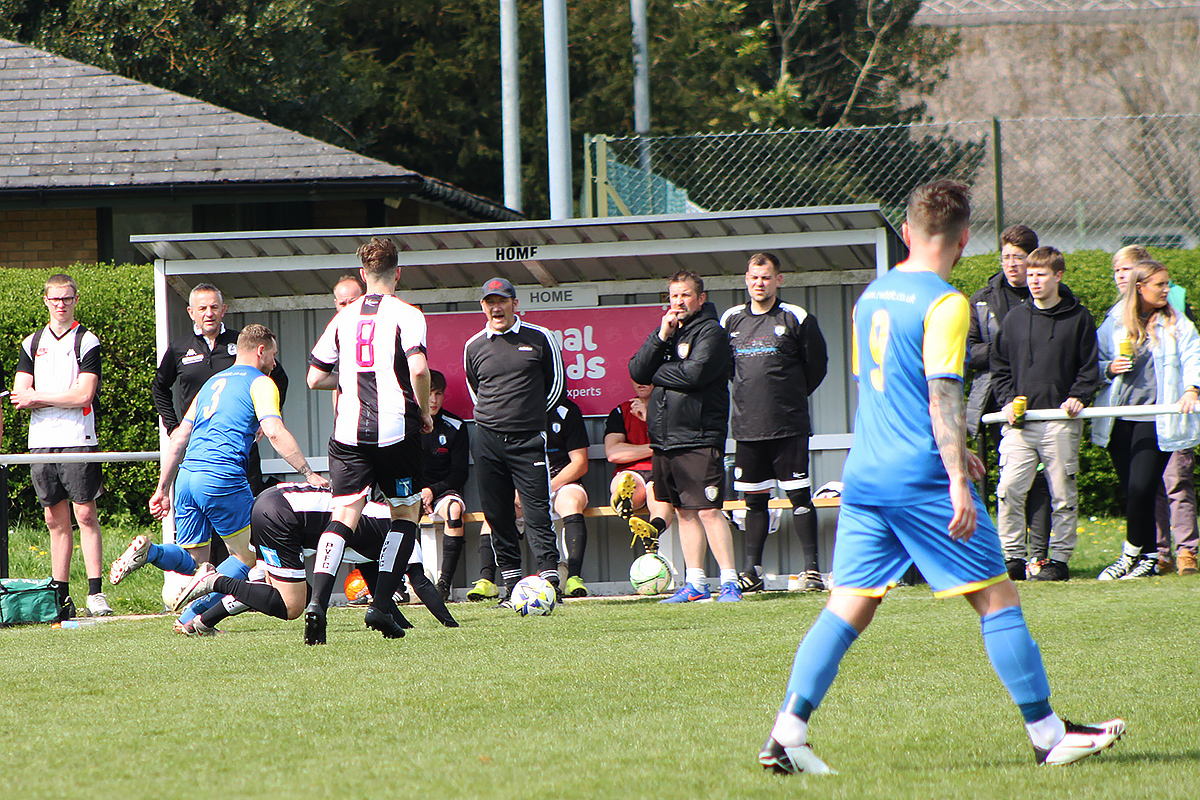 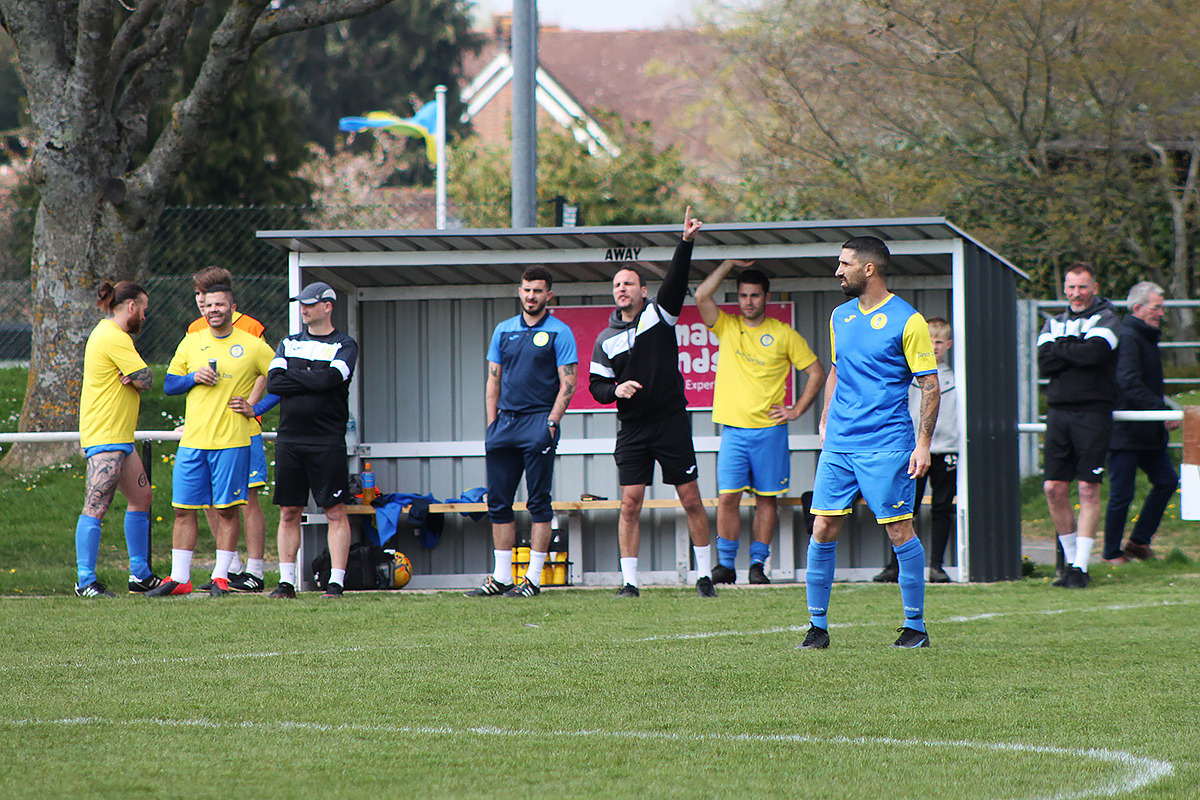