The last two seasons have seen Royal Wootton Bassett Town enjoy significant success in national cup competitions. In 2020-21 Bassett enjoyed record-equalling runs in both the FA Cup and FA Vase in before following these achievements in 2021-22 by going further than ever before in the Vase and registering the club's biggest margin of victory in an FA Cup contest.

Such success on the national stage has been rare in the club's history. And Bassett will be hoping to maintain that in 2022-23.

Courtesy of last year's journey to the third round, Bassett will enter the Isuzu FA Vase at the first round stage. But to replicate their recent success in the Emirates FA Cup, Sam Collier and his side will have to overcome former Hellenic League foes.

Full details of what lies in store for Bassett in this season's competitions are below.

Although coming to a frustrating end after defeat in a preliminary round replay against Ardley United, Bassett did at least set a club record in the FA Cup last season with the thumping 4-0 extra preliminary round triumph away at Thornbury Town representing the club's biggest margin of victory in the competition.

After starting on the road in last season's competition, this year will see Bassett enjoy home comforts in the extra preliminary round as they have been drawn to host Windsor. That tie is scheduled to take place on Saturday 6 August.

Up until the reorganisation of non-league football that took place last year, Bassett and Windsor had been Hellenic League Premier Division rivals for four seasons. The changes made led to Windsor being moved across to the Combined Counties League Premier Division North, in which they finished seventh in 2021-22. Now though, they will meet again.

The Royalists have enjoyed greater success in the FA Vase though, advancing to the quarter finals in 2017-18 and the fifth round a year later.

Windsor do narrowly hold the upper hand over Bassett in head-to-head meetings. Six league encounters have seen Bassett register two wins, a draw and three defeats against the Berkshire side. The teams have met once before in national cup competition action too, with Windsor triumphing 2-1 after extra time in an FA Vase second qualifying round tie at Stag Meadow in 2015-16.

Should Bassett triumph against the Royalists, they will then host another former Hellenic League rival in the form of either Highworth Town or Reading City in the preliminary round on Saturday 20 August.

Potentially facing local rivals Highworth is a mouthwatering prospect – and the teams have thrown up excitement against one another in the FA Cup twice before. Meeting in the 2007-08 extra preliminary round, Bassett – then under the management of Paul Burke – came from behind to win 2-1 in a replay at Rylands Way. Then in 2012-13, Dave Turner's Bassett side also came from a goal down to convincingly triumph 3-1 in a Friday night preliminary round clash. Going back further, Bassett also boast an 8-1 win against Highworth in the 1964-65 FA Amateur Cup.

On both occasions when the teams have met in the FA Cup, Bassett were a division lower than Highworth – and the same would be the case should they meet this season with the Worthians entering their fifth season of in Southern League Division One South.

Highworth have acquitted themselves well at step four, earning a solid tenth place finish last year. They have also enjoyed runs to at least the first qualifying round of the FA Cup in each of the last three seasons, a stretch that includes reaching the second qualifying round in 2019-20.

Highworth's best run in the FA Cup came in 2012-13 when they advanced from the extra preliminary round to the third qualifying round. Meanwhile, they famously reached the FA Vase semi finals in 2014-15.

Reading City would represent new opponents for Bassett in national cup competition. But the teams are more than familiar with each other, having been members of the Hellenic League Premier Division for eight seasons before City joined Windsor in moving across to the Combined Counties League, where they placed ninth in the Premier Division North in 2021-22.

In fifteen previous competitive meetings, Bassett have five wins to their name, Reading have triumphed on seven occasions, while there have been three draws.

Reading's best run in the FA Cup came in 2013-14 – the first year in which they entered, with the Citizens (then known as Highmoor Ibis) advancing to the first qualifying round, knocking out Windsor along the way. Since then, they have advanced to the preliminary round five times – including last year, and exited in the extra preliminary round on three occasions. In the FA Vase Reading have gone no further than the first round.

Last year's record-breaking run to the third round, which saw Sam Collier's side overcome Knaphill, Portishead Town, Downton and Torpoint Athletic before suffering a 3-1 defeat against eventual semi-finalists Hamworthy United, means Bassett have received an exemption through to the first round proper of the 2022-23 Isuzu FA Vase.

The 22nd time Bassett have entered the Vase, this season will be the first occasion that the club have not been forced to navigate the qualifying rounds.

When Bassett do enter – the first round is scheduled to be played on Saturday 22 October – the aim will be to continue and build upon the success enjoyed in the Vase over the past two seasons. In the curtailed 2020-21 campaign, Bassett matched their best ever run by reaching the second round, before going one better last year.

Who they will face first in the Vase this time around is still to be determined – but at least an exit before the autumn is not on the cards.

Historical details of Royal Wootton Bassett Town's participation in various national cup competitions are available in the history section of our website.

See the following pages for details: 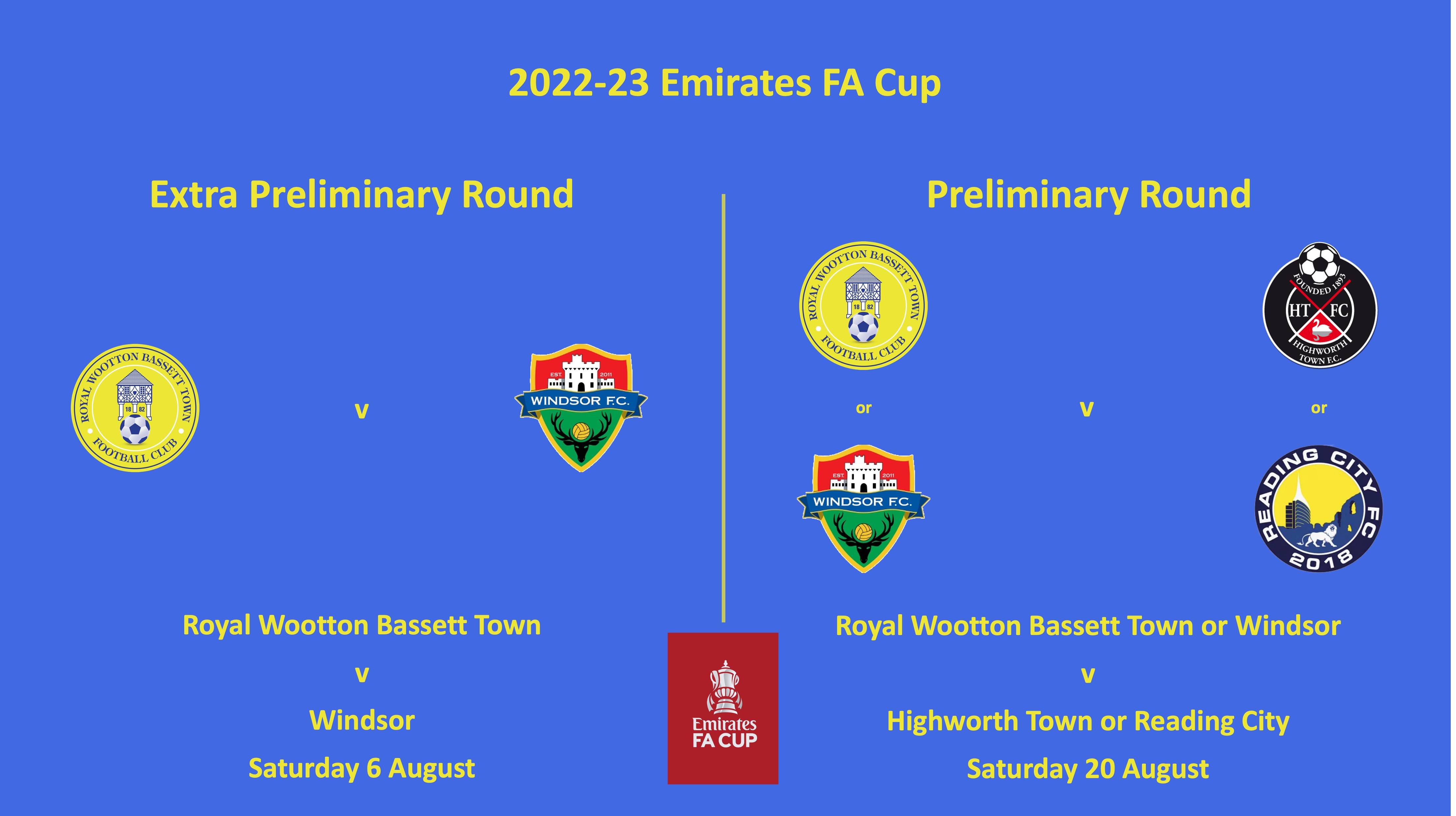