With the 2018-19 season complete, we take a look at our teams achieving honours this year. This series begins with a review of the double-winning Ladies team, who finished as South West Women's Football League Eastern Division champions and Wiltshire County Women's Cup winners.

In a strange quirk, it was only goal difference that separated the top two sides at the end of the season. But thanks to a prolific attack and stingy defence, which conceded just ten goals in their twenty league games, it was Bassett who laid claim to a place at the summit.

FA and County Cup commitments meant Bassett, under the guidance of new joint-managers Jonny House and James Goddard, got their league campaign underway late. They started well though, defeating Oldland Abbotonians 5-0 away from home as Aly Lyons bagged a hat-trick.

However, Bassett suffered a frustrating 2-1 defeat at home against Swindon Spitfires a week later as they threw away a half time provided courtesy of Hayley Huckin.

Defeat proved to be the start of something special though as the Ladies won their next fourteen games.

Goals from Gracie Bridger and Hannah Gulliver edged out Swindon Town Development by the odd goal in three before both Arrell and Huckin struck braces in an 8-1 thrashing of Trowbridge Town. A tricky trip to AEK Boco was successfully managed as Huckin struck twice as her team raced into a 4-1 half time to lead before eventually triumphing 4-2.

Arrell's brace coupled with a strong defensive effort to defeat Almondsbury 2-0. In the reverse fixture just seven days later Lisa Coe grabbed the only goal of the game to make it five on the spin.

Their good run continued courtesy of two goals apiece from Bassett's prolific front pair of Arrell and Huckin, which delivered a 4-0 victory at home against Cheltenham Town Development, who started the day level on points with Bassett.

When they next stepped onto the pitch Bassett hosted Frampton, who were proving to be the team's main title challengers thanks to an unbeaten start. On a windy afternoon, Arrell and Huckin were on target to put Bassett in control. But Frampton struck back shortly before half time and it took another outstanding defensive display after the restart to guarantee the three points.

While the team's performance levels dropped somewhat, they continued to rack up the wins while, importantly, goals were not conceded. Laverstock and Ford were defeated 5-0, the early season loss to Spitfires was avenged with a 4-0 win and Coe and Huckin sealed a narrow 2-0 triumph away at Trowbridge. February then began with a 5-0 victory at home against AEK Boco before basement dwellers FC Chippenham were seen off 7-0.

Bassett then began March with a trip to Frampton. A huge fixture, it proved to be a tense encounter. But Bassett, who had by this point played more than their hosts, ensured Rangers could not overtake them if they had won their games in hand, a first half own goal earning a share of the spoils.

With three games to go, Bassett needed seven points to seal the title.

Their run-in started in fine fashion as Arrell scored five and Huckin a hat-trick in a 10-1 thrashing of Laverstock.

Tougher opponents awaited in their final two fixtures, beginning with a trip to third place Cheltenham. Bassett's performance was nervy, but they still managed to lead heading into the game's final stages. They were fortunate that Cheltenham had earlier missed a penalty and it seemed as though another win was on the cards. But Cheltenham earned a draw with a last minute equaliser.

That left Bassett needing to beat Swindon Town Development to make certain of the title. On a bobbly, dry pitch, nerves and determined opposition made Bassett's life difficult. Huckin headed Bassett in front in the first half, but it was clear that more than one goal would be needed. A stunning save from 'keeper Abi Footner and the woodwork kept them in front before long-serving midfielder Amber Egerton settled the nerves with a goal from a cross-cum-shot late on.

That goal proved to be the title winner, securing the double and a second promotion in three years.

At the third time of asking, Royal Wootton Bassett Town Ladies won the Wiltshire County Women's Cup in 2018-19, completing the first half of what would be a league and cup double.

Bassett had made the final on two previous occasions and lost, including in 2017-18 when they were beaten 2-0 by Swindon Town Ladies Development. But they more than made up for those two defeats with a thumping 9-0 final victory against Swindon Spitfires.

Their passage to the semi-finals was a comfortable one with two easy home victories against County League opponents.

Salisbury were defeated 7-1 in the first round as Holly Baker and Zoe Shellard both scored braces. Then against Melksham Town in the last eight Bassett triumphed 15-0. Lauren Kayll led the way that afternoon with five goals, while Baker contributed and Emily Arrell netted a hat-trick.

Their semi-final away against South West Women's Football League Eastern Division rivals Laverstock and Ford was set to be a trickier prospect. And so it proved to be.

Bassett went into half time a goal to the good, but the hosts equalised midway through the second period. A frenzied final quarter of the game ensued in which both teams had chances to win the game. With extra time looming though, Hayley Huckin raced onto a Kayll through ball to score the winner.

League rivals awaited in the final too. But after an evenly matched opening half hour, Bassett raced away to victory. They led 5-0 at the break and went on to add four more in the second half as Arrell and Huckin hit hat-tricks. Kayll added a brace, while Maddie Elliott rounded off the scoring as Bassett were crowned county champions for the first time in scintillating style.

Throughout the season we have both pondered on what might be spoken about during this end of season review. Would it be one of under-achievement? Would it be one of an average season with hope of kicking on next season? Or would it be a celebration of success? It gives us both immense pride and joy to be able to comment on the incredible things the Ladies have achieved this season.

After a shaky start in the FA Cup, the team soon got down to business by gaining smooth progression through the County Cup with victory over Salisbury. However after putting points on the board early on in the league, we suffered a highly frustrating loss to local rivals Swindon Spitfires. This however would prove to be the start of something special.

In the post-Christmas period, even though the performances weren't necessarily pleasing on the eye, the squad proved that they could dig deep and get themselves over the line. Management and supporters were constantly shown just how brave, determined and committed this group of players were in trying to achieve success and that they would let nothing stop them.

The cup final victory over Spitfires showed what the team were capable of. Even in winning 9-0, they were made to work hard for it and showed an ability to dig in and keep a clean sheet whilst also showing a ruthless cutting edge and the quality to break teams down no matter what. In the league too, the points kept coming as the team ground out results regardless of the pressure. And that enabled them to achieve a second promotion in three seasons, which will see Bassett compete at the highest level of women's football in the club's history

As a management team, we'd like to thank a few groups of people.

Firstly, everyone at the club who have helped us settle in and provided us with any support we needed throughout the season. Secondly, to all of the supporters and parents who turned out in the wind, the rain, the cold and of course the sun to watch the team - and I'm sure provide them with words of wisdom and encouragement to keep them going and help them through their frustrations and celebrate their successes.

And last but not certainly not least, the biggest thank you has to go to the players. They have shown up in all kinds of training conditions in their numbers and worked hard and tirelessly to make sure they were the best that they could be and they got exactly what they deserved. We have held them to extremely high standards and they took everything on board. For this we are extremely proud.

Here's to next season and the rollercoaster of emotions we'll experience together. We look forward to your support and can't wait to get stuck in. 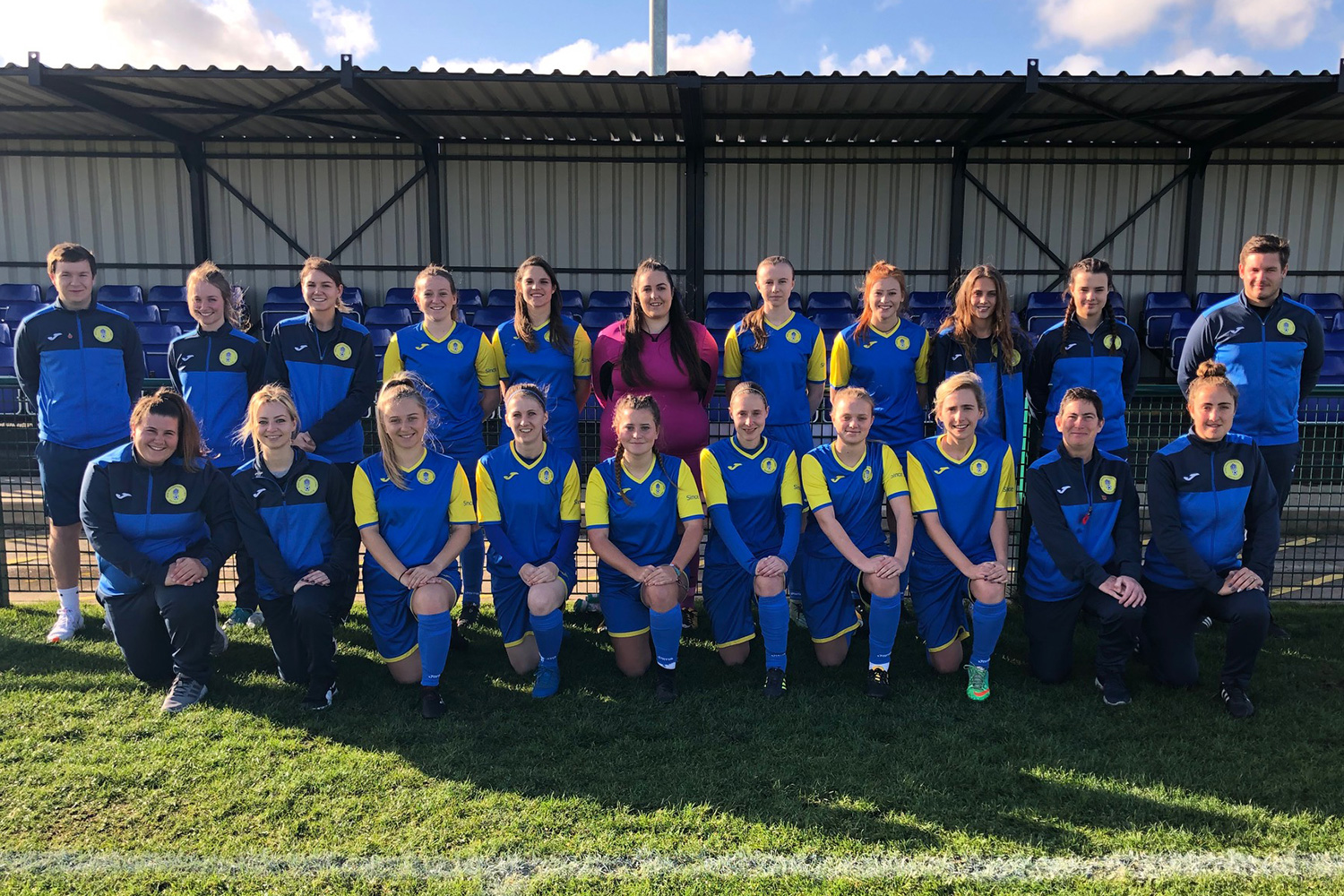